….AND then Think Again – Not all Austrians yodel! 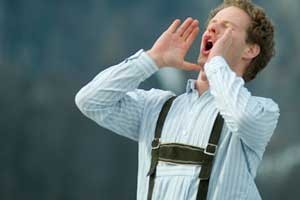 I have worked in Europe for half of a lifetime and then another half here in the U.S. While there are some similarities in the way we do business, the differences are vast and ignoring them can have devastating effects. Thinking Globally is great, but it’s also important to Act Locally.

To start with, Europe is not as uniform as the US. Don’t get me wrong, selling in the Midwest area of the US is vastly different than selling in the New York tri-state area. Having done both, it’s important to understand that in New York you literally have a “minute” (ever wonder how the “New York minute” came about?) to get your point across while in the Midwest people are a bit more patient.  Just because people in the South seem more relaxed and give you more time, doesn’t mean that they will buy from you. On the flip side, people on the Northeast Coast can be rather abrupt, but that doesn’t mean they are not interested.

Europe on the other hand not only has different geographies, but also a large number of different countries (EU & non-EU over 35) with vastly different languages. Within those countries there are also social and linguistic nuances, and prejudices that are older than the history of the U.S. coupled with a desire to stay authentic.

Below are some tips on how to be successful when venturing abroad or communicating with international audiences.

Don’t Think You Can Go It Alone

The biggest mistake would be to think that you can do business in another region without local presence or, at least advice. Hire a local business person within your industry and ask that person for advice on what to do and what NOT to do. Once you have that person on board, take their advice, understand and adjust to the cultural differences.

My home country Austria is located in the Eastern Central part of Europe, but don’t make the mistake to think that we are Eastern Europeans. We are by any means of the definition culturally situated in the West because of our history. A big American company made the mistake to divide Europe by geography and put Austria in the Eastern region (along with the Czech Republic, Hungary, Croatia, Bulgaria, etc. – all countries with emerging economies) instead of aligning it with Germany, Italy, Switzerland where Austria has not only traditionally been part of but also has close economic ties. The results were pretty devastating. The very successful Austrian management team resented the change and it was difficult to manage Austria within a region where there was no history of an open market economy until the Iron Curtain came down in 1989. Big mistake!

Try to Understand the Way Business is Done

Go easy on the PowerPoint and have a Cappuccino instead. Many of my friends in Austria, Germany, Switzerland, France and Italy tell me that to this day business is done by building relationships, taking prospects and clients out, drinking and eating. While we here in the U.S. still enjoy meeting client contacts in-person, it’s no longer essential to the success of a company. I have done business with clients that I didn’t meet until year 3 into the engagement, something that is still rare in Europe. Wining and dining are still essential ingredients to being successful in many markets. And so, if you do not or someone you hire doesn’t embrace that concept, it will be hard to build trust.

English is Standard, but Watch out for Linguistic Differences

Of course, English is the universal language and most companies that want to do business internationally will hire people who speak English quite well. That doesn’t mean that they can master all the facets of the language.  Be careful in the way you communicate and make sure that what you are trying to say is something that is properly understood by your counterpart. Avoid idioms and explain your proposition in more than one way. I have sat in on many meetings with international companies and sometimes people try to translate certain terminology in a way where it doesn’t make sense in the other language. This can lead to confusion and mismanaged expectations

Coming late to a meeting in Germany or Austria is really rather unacceptable. In Italy you will probably not leave a bad impression, only if you are late and a bad dresser, too! Joking aside (not really!), don’t make the mistake to think that Germany, Austria and Switzerland have a lot in common just because we all speak German (at least in parts of Switzerland). While there are many similarities, the differences run deep and so do some animosities as well.

European countries are very proud of their heritage, their food and their traditions. When you make references, be sure that you really know what you are referring to. Austrians don’t yodel (as a matter of fact, most of us have never heard of, least of all watched “The Sound of Music”) and not all Germans are rigid.

In closing, my strongest suggestion is to keep an open mind and not to stereotype. Like in every sales situation, it’s best to observe, learn, ask questions, adjust and most importantly to listen. Humility goes a long way, especially when dealing with a different culture. Nobody likes to think that they are inferior and the best success can be achieved when we embrace rather than judge.

Get your copy of Monika's new book here!

Thank you for signing up!